Two works have been selected for the Royal West of England Academy’s 2020 Annual Open Exhibition opening on Saturday November 21 in Clifton, Bristol.

Sculptor’s Drawing began life as a preliminary drawing for the sculpture Think Fast, Act Slow commissioned for the exhibition A Good Age at the Devon Guild of Craftsmen in Bovey Tracey in 2019 – and then took on a life of its own. Sculpture is normally thought of as static but the trolley in Sculptor’s Drawing suggests mobility – a potential for movement of something too heavy to lift.

Husk was also made as preparation for Think Slow, Act Fast, to explore imagery and ideas extending recurrent themes of earlier work – ideas sometimes conceived long ago but never realised. Longhouse forms piled up dynamically suggest discarded husks or shells – the residue of former experiences or lives – surmounted by what may be thought of as the here-and-now.

The exhibition runs until Sunday 7 March 2021. Tickets can be booked in advance – see the RWA website for details.

Below: THEN & NOW: FINAL EXHIBITION AT THE SHIPPON GALLERY BEFORE COVID CLOSURE.

Installing the exhibition in January 2020

Think Slow, Act Fast in the studio at Hook Farm before installation in A Good Age

Over many years I have developed and refined a lexicon of imagery through extensive drawing and the business of studio practice. The long-house, villas and indeed palaces are seen as dwelling places of the mind. They stand as metaphors for the artist’s self-image and over time have acquired dramatic attachments around, above and beneath. These include axes, needle and thread, letters or boulders and, almost always, a sailboat, steamer or ladder crossing the wave/roof of the long building with smoke, steam or flame emerging from within. Earth Red House 2018 (below) is the latest of these works. 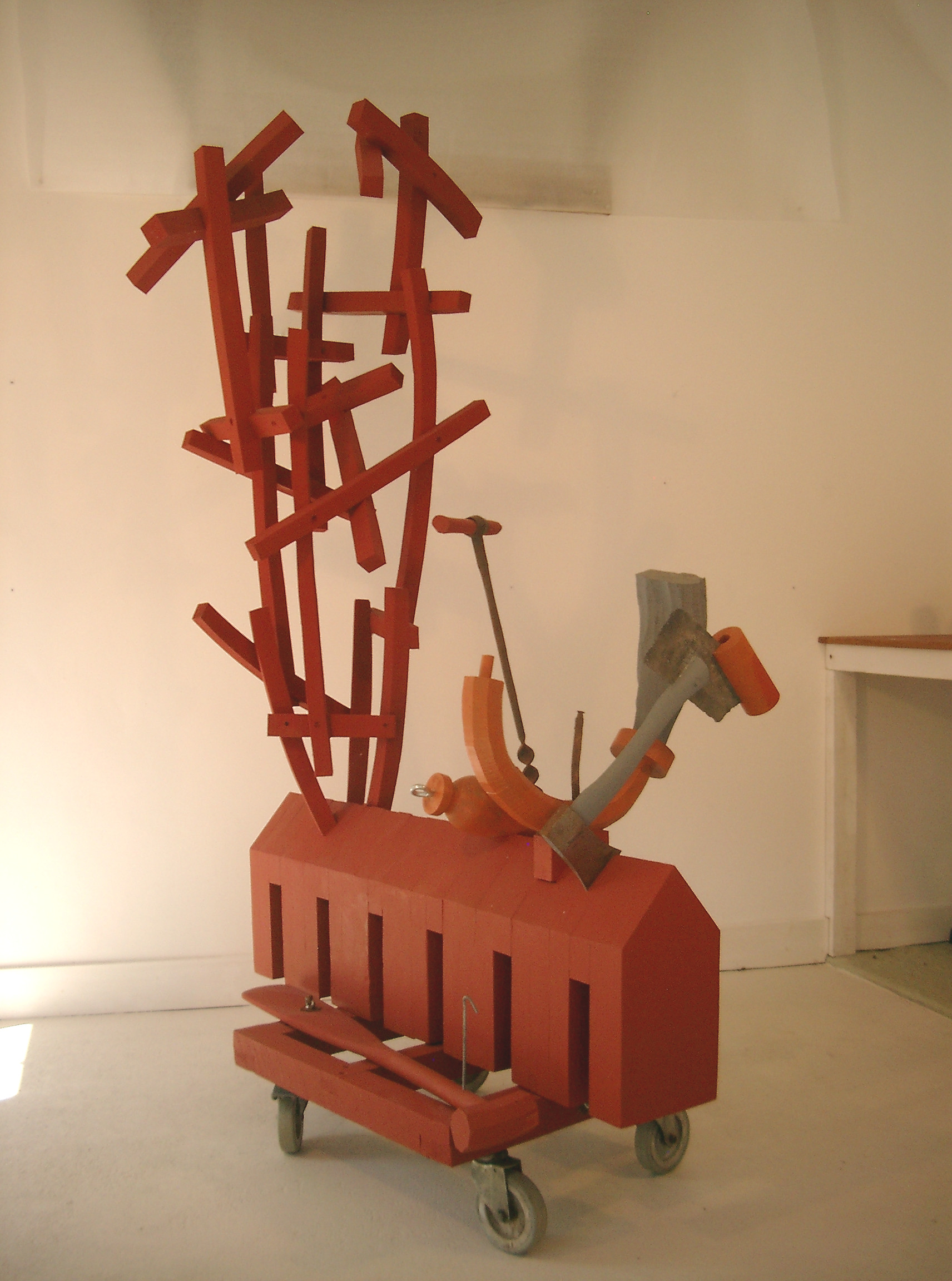 My main interests concern identity allied to the demands and potential of sculpture and materials. The latter includes the use of strong colour with wood, bronze casts and, for greater plasticity and touch, fired stoneware clay.

The sculpture and drawings I make in the studio are primarily for gallery or museum exhibition. However, I have also had opportunities to build very large works for sites as diverse as Socrates Sculpture Park in New York, a traffic island in St Louis, Missouri, a remote field in South West Ireland and Victoria Park in Bath. In London Docklands I built a sculpture using sizeable off-cuts from Canary Wharf and have a permanent sculpture Shadowplay 1992 (below), at East India Docks, which memorialises the past working life of the site.

In East Devon, I work principally on sculptures of a more personal nature – essentially creative/poetic metaphors. My latest project is a commission for the Devon Guild of Craftsmen and Libraries Unlimited for their exhibition A Good Age: Change in my Time to be held at Riverside Mill, Bovey Tracey from September 21 to November 3.

2019 A GOOD AGE, The Devon Guild of Craftsmen, Bovey Tracey

1995  SCULPTURE GARDEN, Henley Festival for music and the arts

1986  Fine Art Board of the Council for National Academic Awards