The Shippon Gallery opened in September 2017 to show sculptures and drawings by Dave King, usually alongside works by a guest artist, most recently Joel Fisher (above). But the current exhibition Then & Now is entirely of works by King selected from the past 50 years. These include two large wall-mounted sculptures chosen to represent the UK at the Paris Biennale XI in 1980. Then & Now also features King’s recent commission, Think Slow, Act Fast, seen below in his studio and previously exhibited at the Devon Guild of Craftsmen.

The Shippon Gallery is in rural East Devon between Axminster and Chard. See Contact page for directions. It is currently open by appointment only, due to the Covid-19 pandemic. We hope to reopen next year with Found, a show of work in a variety of media, primarily painting, sculpture and textiles but also printmaking, photography, ceramics and papercutting. It takes a sideways look at aspects of the landscapes of where the artists live: Jenny Graham in Burrowbridge on the Somerset Levels, Lucy Large in West Somerset and Jacy Wall on the West Dorset border overlooking the Axe Valley. Future exhibitions will include a display of paintings and books by Andrew Lanyon: A Dinner-Gong in the Jungle. (See Upcoming) 01460 220021 / alisonoldhamart@googlemail.com 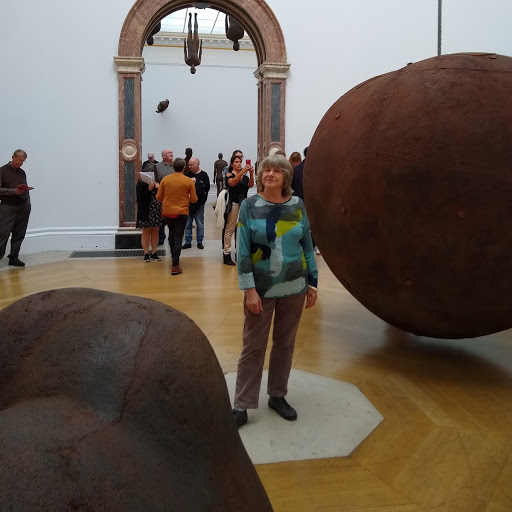 The Shippon News has reviews of exhibitions by Alison Oldham, pictured above at the Royal Academy with Fruit, Antony Gormley’s sculpture whose materials are described as cast iron and air. She was the Research Fellow of Falmouth College of Art/Tate St Ives and art correspondent of Oracle teletext and the Ham & High. Most reviews focus on a work of art that she’d like to take home. It begins with a piece on a new book on the painter Frances Aviva Blane.

It continues with a review of Landscape Portrait: Now and Then at the Hestercombe Gallery near Taunton, followed by a piece on Dorset Art Weeks, which included the open studio of textile artist Jacy Wall (above), and then Philippa Abrahams’s account of her re-creation of Botticelli’s Young Man Holding a Roundel.

Next is a review of Both Keen, a collaborative exhibition by Natalka Liber Stephenson and Florence Shaw in an unusual space in Bermondsey. This is followed by information on Frances Aviva Blane’s participation in Fragmented, a joint exhibition with ceramicist Claudia Clare at the Zuleika Gallery, London, plus reviews of the book FAB, with text by Susie Orbach, and an exhibition staged in 2018 Broken Heads Broken Paint.

Brian Rice: 60 Years of Paintings and Prints at the Royal Albert Memorial Museum in Exeter in 2019 is followed by information on Patrick Jones’ home exhibitions in Budleigh Salterton and an account of Chris Orr’s talk at the Ilminster Literary Festival on his illustrated book The Miserable Life of Fabulous Artists.

The reviews continue with Into the Night at the Barbican Art Gallery is followed by Helene Schjerfbeck at the Royal Academy, Vuillard: The Poetry of the Everyday at the Holburne Museum, Bath, Lee Krasner’s Living Colour at the Barbican Art Gallery, The World As Yet Unseen: Women Artists in Conversation with Partou Zia at Falmouth Art Gallery, On Paper at the Thelma Hulbert Gallery in Honiton, Albert Irvin and Abstract Expressionism at the Royal West of England Academy, Modern Couples: Art, Intimacy and the Avant-garde at the Barbican in London, and 50 Years, 50 Artists at Annely Juda Fine Art in London.

Also included are Virginia Woolf: An exhibition Inspired by her Writings, most recently at the Fitzwilliam Museum, Cambridge, then of Trail@14 at the Devon Guild of Craftsmen’s Riverside Gallery in Bovey Tracey, the Royal West of England Academy’s 166th Annual Open, and an exhibition of prints in Budleigh Salterton – Looking For Jeffery Edwards, Frances Aviva Blane’s Broken Heads Broken Paint and Howard Hodgkin’s Last Paintings, both in London, and Westcountry shows Sculpture @ The Walled Garden in Moreton, Dorset (below), then Jane Hedges, Chris Dunseath and Jacy Wall in Dorset Art Weeks 2018, Kate Westbrook’s Diana and Actaeon at The Malthouse Gallery in Lyme Regis and David Haughton in St Just at Penlee House, Penzance. 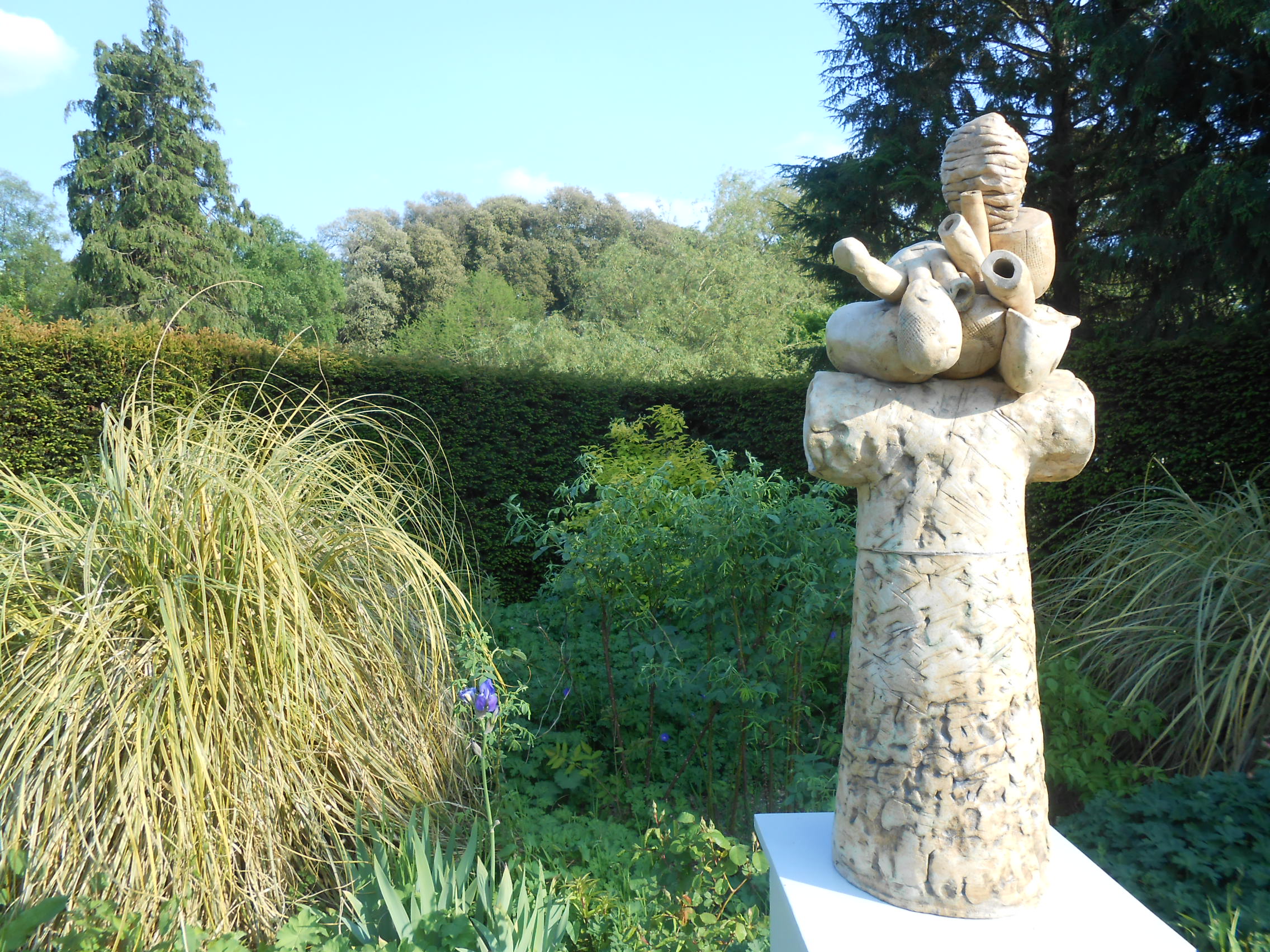